While the Food Network features several kitchen experts who can pair flavors and even dishes and drinks, they’re trying something new this September with an open-air event that will now pair food and music. Food Network Magazine is hosting its first-ever Food Network in Concert event Saturday, September 20 at Ravinia Festival, an outdoor concert venue based in Highland Park, IL.

Food Network in Concert at Ravinia will be a day-long experience, featuring performances by Grammy Award-winning artist John Mayer, singer/guitarist and American Idol Season 11 winner Phillip Phillips, as well as DJ Alexandra Richards, Twin Forks (with Dashboard Confessional’s Chris Carrabba), singer/songwriter and guitarist Raul Midon, indie rock band California Wives, and guitarist/singer Zane Carney, among others. While attendees can listen to tunes throughout the day, they’ll also get to sample fare from a huge showing of local Chicago chefs, as well as stars from the Food Network. 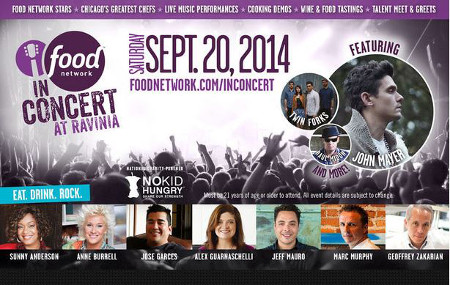 More than 50 of Chicago’s most well-known chefs and mixologists will also be attendance, including Tony Mantuano (a Bravo Top Chef Masters champion and Chef/Partner at Spiaggi, Chicago’s only four-star Italian restaurant),  Mindy Segal (James Beard Foundation award winner for Outstanding Pastry Chef in the Country in 2012 and owner of HotChocolate restaurant), and many more.

Ravinia Festival happens to be located just a few miles away from Prime Publishing headquarters, and we’ll be sending a couple of our editors to scout out the food and music (stayed tuned for our post-event coverage!). Plus, be sure to follow us Twitter on the day of the event on September 20. We’ll be live tweeting via the handles @RecipeLion and @SlowCookRecipes!

Before we get started... Be sure to check out RecipeLion.com's most delicious cookbook yet, Family Favorite Casserole Recipes. You can find this … END_OF_DOCUMENT_TOKEN_TO_BE_REPLACED