By Blair Chavis and Julie Sammarco

As Americans across the country packed their bags and headed off for a barbecue-filled Memorial Day weekend, the Food Network Magazine gave Chicago locals some tasty reasons to stick around town a bit longer.

Magazine fans and press wrapped a line around Illinois Street in the heart of Chicago’s River North neighborhood May 22 for their chance to sample fare at local restaurant RPM Italian, and mingle with Food Network celebrities Jeff Mauro and Alex Guarnaschelli. Mauro is the winner of the seventh season of Food Network Star and host of the Food Network cooking show, Sandwich King. Guarnaschelli is a recurring judge on the popular prime-time series Chopped and is featured on her own shows, The Cooking Loft and Alex’s Day Off, along with appearing on Food Network’s Iron Chef America as both a challenger and a judge. 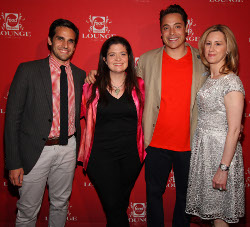 “I love just being a representative for the Food Network,” Mauro said. “I’m pretty much the Chicago guy for the Food Network. That, in itself, is a dream.  The show’s great. I love it all. But, just still living here, shooting my show here, featuring my family, my neighborhoods, my people, that’s unbelievable.”

The lounge event is the Food Network’s way of bringing the magazine to life, according to Food Network Magazine Features Editor Yaran Noti.

“It’s a way for people to walk into a space and see sort of what the magazine would look like if it were a space, if it
were a restaurant like this,” Noti said.

This lounge event marked the second time the Food Network hosted such a soiree in Chicago. The Food Network has hosted similar local events in Los Angeles, South Beach and New York since 2010. Last year’s event in Chicago took place at Mercat a la Planxa in Chicago’s South Loop neighborhood. 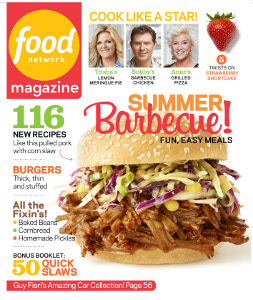 Prime Publishing sent a couple of its editors from AllFreeSlowCookerRecipes.com and FaveHealthyRecipes.com to represent the team and sample foods from both RPM Italian and dishes inspired by the Magazine.  The menu at the event included traditional Italian favorites with a modern twist. 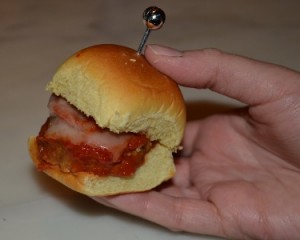 In addition, the Magazine used this event as an opportunity to showcase their June issue to local fans, along with recipes from the issue.

Provolone Stuffed Pickled Peppers (shown left) and Lobster Caprese (shown below, right) also made an appearance. The stuffed peppers were bite-sized combinations of salty and sweet, with a surprise kick of vinegar at the end.

The Lobster Caprese was a fun and fancy play on an Italian classic. Instead of a plate of caprese salad, guests received skewered bites of fresh mozzarella, basil, and lobster. Lobster gave a luxurious element to an otherwise simple 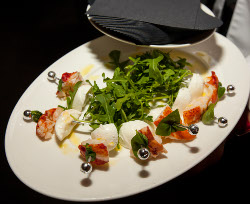 party appetizer. Bright-colored lobster kept the natural color of the salad, which normally incorporates tomatoes. This is an easy appetizer to mimic at home for your summer guests.

Oscar Mayer, a sponsor of the event, provided a delicious pizzette (small pizza) that featured cremini mushrooms, bacon, and Fontina Fonduta cheese (shown below). This pizzette was a savory sensation, with a soft, chewy crust and a textured, bacon-packed topping. 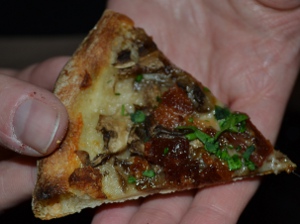 Another sponsor at the event, Philadelphia, provided one of the featured desserts, Chocolate Cheesecake Mousse, featuring Kraft Snack Delights Chocolate.  To try this recipe at home, see the full recipe below:

For more information on Food Network events in your city, visit the Food Network’s events page.

What’s your favorite dish to serve at a summer gathering?

Before we get started... Be sure to check out RecipeLion.com's most delicious cookbook yet, Family Favorite Casserole Recipes. You can find this … END_OF_DOCUMENT_TOKEN_TO_BE_REPLACED