When it comes to breakfast pastries, cinnamon rolls are definitely one of my favorite treats. The gooey cinnamon filling, doughy roll and icing on top is always a great way to start the day, if you ask me. When I saw a recipe for Stuffed Cinnamon Roll Bake by Table for Seven, I immediately knew I had to try it. I mean, cinnamon roll casseroles are amazing on their own – easy to make and great for feeding a crowd. But by adding a cream cheese layer, your ordinary cinnamon roll casserole becomes an extra-special treat that’s gooey, sweet and absolutely delicious. 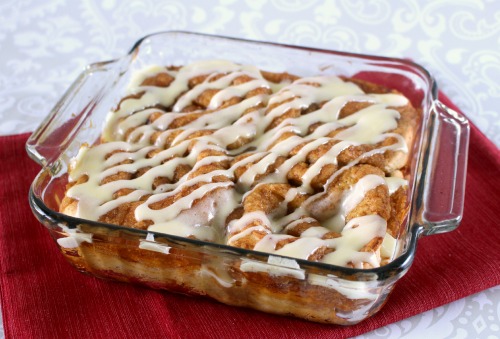 The recipe on Table for Seven uses a homemade cinnamon roll dough from scratch, but I wanted to make it even easier by using Rhodes frozen cinnamon rolls. This shortcut version requires only 4 ingredients, plus an optional cinnamon brown sugar topping! I couldn’t believe how easy it was to make, and it made the whole test kitchen smell amazing. If you like super sweet breakfasts, I would definitely recommend using the brown sugar topping; however, if you’d like it a tad less sweet, leave it out! Either way, this Gooey Stuffed Cinnamon Roll Bake will be a favorite in your family, and you’ll love how easy it is to make. Before we get started... Be sure to check out RecipeLion.com's most delicious cookbook yet, Family Favorite Casserole Recipes. You can find this … END_OF_DOCUMENT_TOKEN_TO_BE_REPLACED 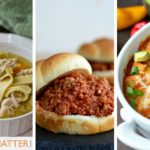