By Cheryl Brunette of www.cherylbrunette.com

An introduction to cakes

Cakes are easy to make. Recipes . . . not always easy to read, especially when you’re juggling a spatula, wooden spoon, hand mixer and 4 eggs. Thus, many years ago I streamlined the process of cake baking by thinking about it differently. I know this is a long explanation, but once you have the process down, you can make a cake about 3 times faster than if you laboriously follow most recipes.

You have basically 3, maybe 4, categories that go into a cake:

When I lived with “the guys” (a couple of husbands and a son, not all at the same time) I baked lots of cakes. This was my procedure which I encourage you to try:

The above part of the  preparation was the Zen part of cake-baking, but when it’s time to put it all together you need to get on with it. Making a cake is an exercise in chemistry and once you start the next part of the process you need to move faster.

Actually, you don’t have to hurry this creaming part. And this is the last time you’re allowed to “beat” anything vigorously. The reason is this: you don’t want your cakes to be tough. When you bake bread you knead the dough for a long time. This heavy treatment develops the gluten in the flour and that’s what gives bread it’s chewiness. It also helps to develop those good-sized holes.

Cakes are meant to be tender and you want to treat the addition of the flour mixture more gently because you don’t want to develop the gluten.

You now have five additions to make to your creamed mixture. After each one you will stir/beat the ingredients just until they’re incorporated (i.e. you can’t see any more powdery stuff or loose liquid). They are:

You don’t have to measure these exactly. Just eyeball them. And because now you’ve combined the baking powder and or baking soda with the liquid which often is acidic, you have a chemical reaction going on. The bubbles are starting to form and you want to get it in the oven soon.

Your last addition is any nuts, raisins, chocolate chips or other tasty morsels. Fold them in gently, trying to get them pretty evenly distributed but precision is not necessary for deliciousness.

Put the batter in the pan(s) and place the pan(s) in the oven and don’t you dare open that oven until more than half of suggested baking time has elapsed or even longer. Otherwise your cake might “fall.”

Something for you to practice on: Marilyn’s Chocolate Zucchini Cake

It occurred to me that since the zucchinis are starting their annual invasion of  the northern hemisphere, you might enjoy having this recipe. Australian and South African readers can bookmark this for the time when the invading hordes migrate their way. This does have an extra little step in there with the melting of the chocolate at the beginning, but it’s just one more skill.

Oh so moist. Not very sweet but definitely a heavy chocolate hit. And, of course, sinlessly good for you because of the zucchini.

Before you even turn on the oven or grease the pans, melt together in a small bowl in the microwave:

Be careful. Do it in one minute or less intervals and stir it in between them. The oil heats up quickly and the chocolate squares will continue to melt as you stir. You don’t want to scorch it. You will add this to the creamed ingredients after all the eggs are beaten in. Let this cool down before you add it to the fat ingredients because you do not want to melt your butter or cook your eggs!

The wet stuff:
1/3 C buttermilk or sour cream (if you don’t have them on hand you can use regular milk (any % fat or nonfat) with a teaspoon of lemon juice or vinegar added to it)

Fold in gently at at the end ingredients:
3 C grated zucchini or summer squash
1/2 to 1 C chopped walnuts

This is thicker than most cake batters but don’t worry.

Easiest is to bake it in a 13″ x 9″ pan for about an hour or until it tests “done.” That’s when the edges are starting to come away from the pan and when you stick a toothpick into the middle of the cake, it comes out clean. If it’s not done it will come out with sticky batter on it. If you use smaller pans, like two 9″ round cake pans, you bake it for less time, like 40 minutes or so.

When it’s cool frost with Cream Cheese Frosting  or any other favorite of yours.

Cream together 8 oz cream cheese and ½ cup soft butter (I prefer unsalted).  Add 2 t of vanilla. Slowly add about 4 cups of confectioner’s sugar, beating with an electric mixer after each addition. (I usually don’t measure. Just keep adding sugar until it’s the right consistency and taste.)

Except for eighth grade Home Economics with Mrs. Blair I never studied cooking in a school. Instead, I learned to prepare food from a gaggle of mentors (mostly Ma, Grandma and Great Aunt Shirley) and by doing it. So be forewarned. I may not explain things in the “right” way, but

Before we get started... Be sure to check out RecipeLion.com's most delicious cookbook yet, Family Favorite Casserole Recipes. You can find this … END_OF_DOCUMENT_TOKEN_TO_BE_REPLACED 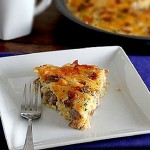